Roosters Go Down By A Point 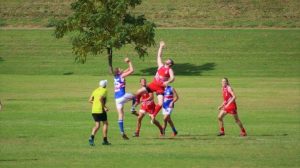 he only match of the day was a nail biter at Rose point Park on Saturday. The Reserve Roosters losing the game lead in the dying minutes to go down by a point. Singleton 12.8-80 defeated by Warners Bay 13.3-81.

The team feels like it was a win that got away. They believed to be the best team on the day and out hustled Warners Bay early. The team’s fitness was the critical difference in the end with the Roosters failing to stop a 7 goal final quarter by Warners Bay.

The Roosters had the score board pressure for majority of the game. They had a small lead at half time and extended it to 15 points at the end of the third.  It looked likely for the Roosters to score their first win of the season with the final quarter going goal for goal early. In the final 5 minutes the Roosters began to tire and they surrendered the lead. Warners Bay scored 4 unanswered goals late in the game to put their nose in front at the final siren.

The Roosters however took confidence out of the game. They believe a win is imminent after matching one of the competitions top sides.

An important inclusion to the team was Joel Deacon who returned from injury. His presence was heavily felt by dominating the ruck. He provided plenty of ball to the play makers. “Skipper” Matthew Tull and Jordan Jeffries-Tapper worked at his feet, winning the ball for a Roosters attack.

Up forward the crowd became very familiar with the Kolatchew family. The father/sons trio having a field day, scoring 8 of the Roosters goals.

All 3 grades are back at home this coming Saturday. The Roosters are hosting Wyong Magpies. Make plans to cheer, cheer the red and the white. First game set to kick off at 10am. 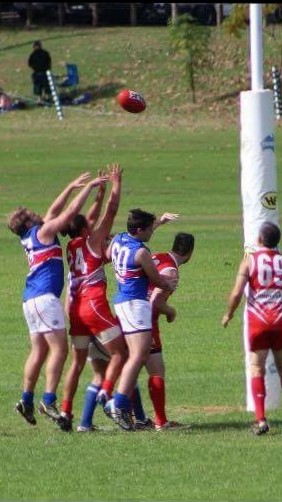