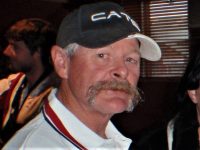 Our Rooster legend Micky Dawe is leaving Singleton and moving to Rockhampton to be closer to his family.

Micky Dawe is the only Rooster to play over 200 senior club games for Singleton Roosters Australian Football Club.

Micky made his way to Singleton from Victoria with his family when he was a youngster. His father was posted at Singletons Lone Pine Army Base. Here it didn’t take long for Micky to find his hand on a footy and Mick joined the Coalfield Cats Football Club.

Soon after Singleton had their own football club, Singleton’s Lone Pine AFC and Micky ran out onto the field wearing Singleton’s first ever Lone Pine guernsey.

Micky was known for his Gary Ablett style footy and dominated in the half forward and forward pocket positions.

In his career with the Roosters Micky captained the side for numerous years and in 1985, the Roosters won their first reserves premiership and Mick was awarded the clubs reserves best and fairest.

Micky will be at the game on Saturday. All 3 grades are at home at Rose Point Park with Reserves starting the day at 10am. Come down to wish Mick all the best.