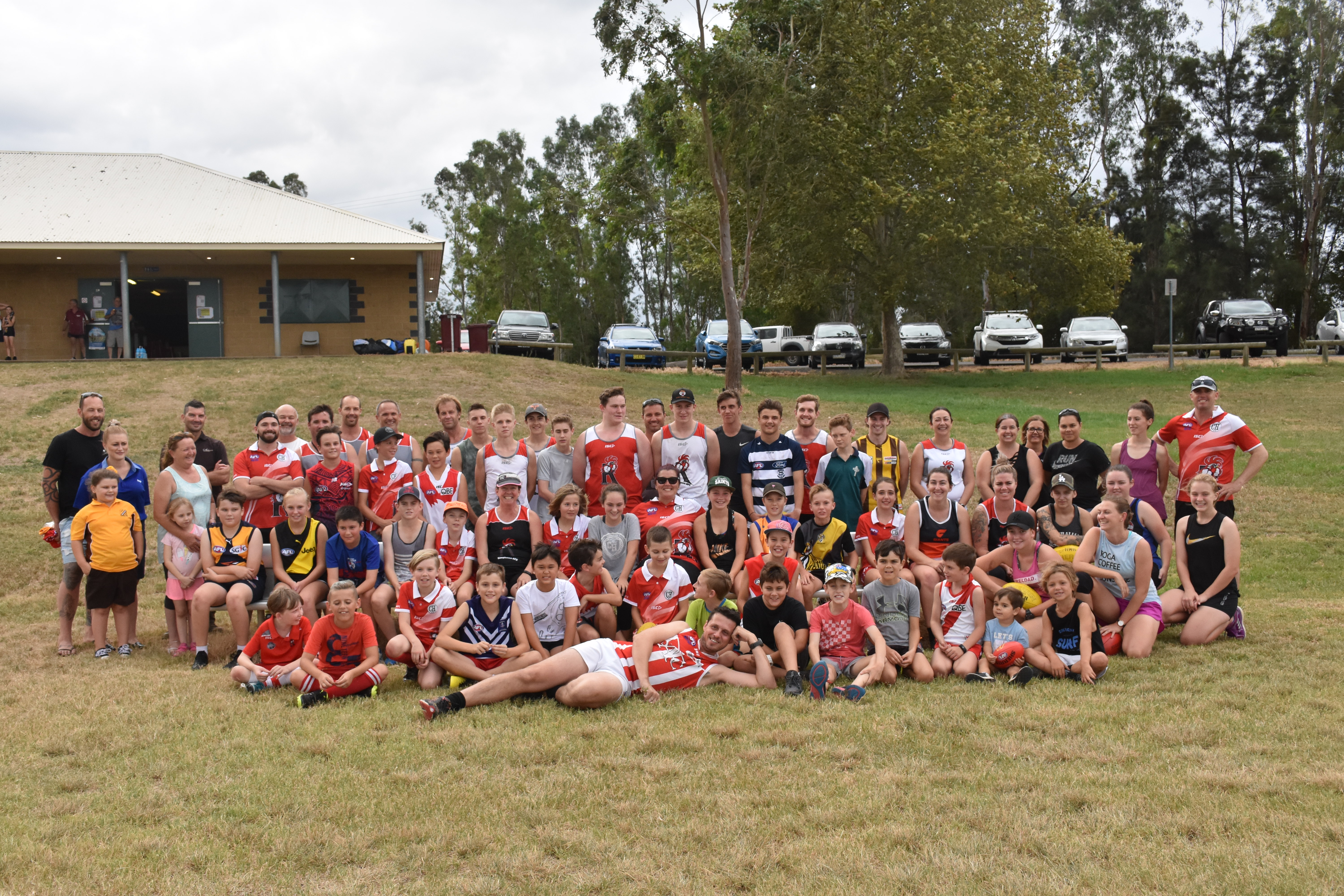 THE FAMILY CLUB: The Singleton Roosters are alive and kicking ahead of the 2019 AFL Hunter Coast season.

As the Singleton Roosters’ welcome in the 2019 AFL Hunter Coast season, the Singleton Argus caught up with five of their leading figures to discuss the club’s family theme. 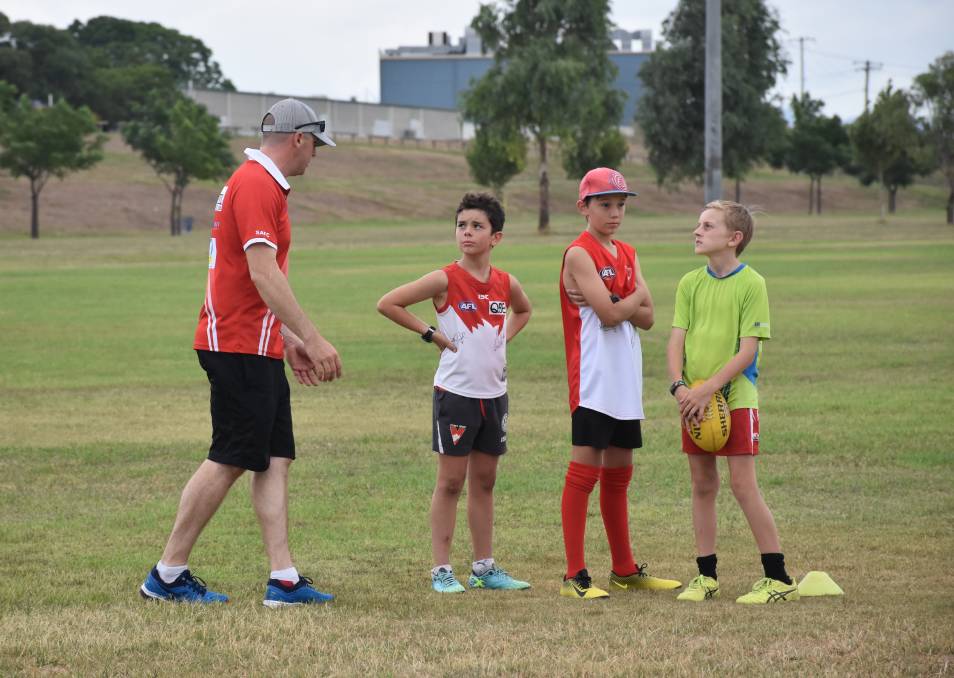 Hundreds of primary school students from around Singleton had a chance to meet Sydney Swans Harry Cunningham and Colin O’Riordan last week as part of the 2019 AFL community camp initiative.

And you couldn’t find a more inspiring duo for the children of the region.

Since making his debut in the AFL’s inaugural ‘Battle of the Bridge’ in 2012, Cunningham has played 104 games. But his journey started in Wagga Wagga, a long way from the bright lights of the SCG.

While Cunningham has had a sherrin in his hands for over 20 years the same could not be said for O’Riordan.

The 23-year-old, who was drafted to the Swans at the end of 2015, commenced his career with the gaelic round ball. 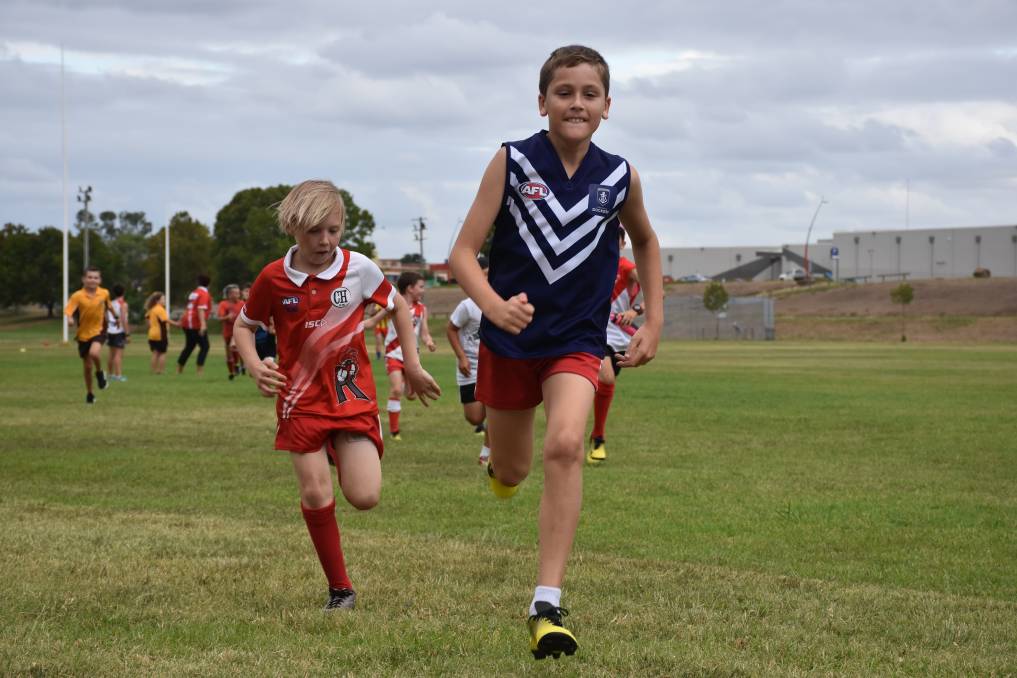 ON THE WING: Junior members of the club sporting the colours of their favourite AFL teams head to the bench.

“I think there were about 70 people in my village back in Ireland and you’d have more in this room today,” O’Riordan added when addressing students in the Christian College hall.

So why does Simon Trickey headline this opening chapter?

You could not find a more dedicated figure for junior footy in Singleton. 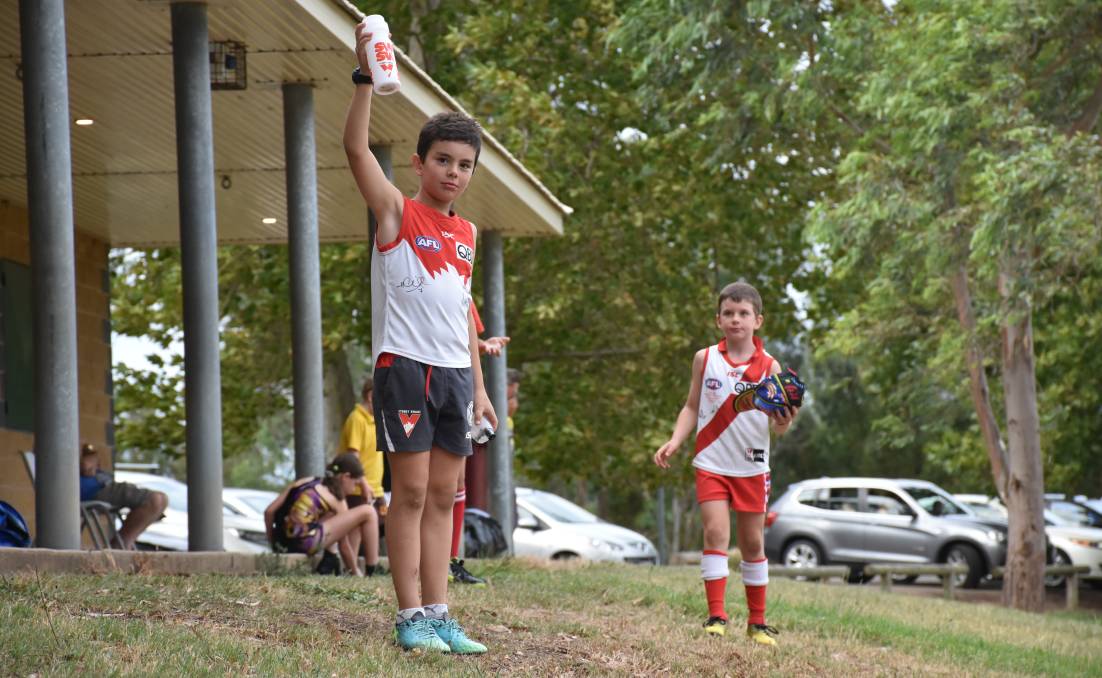 THE FUTURE: Junior members watch on from the pavilion.

While he may never have played a senior game himself, the Roosters’ club official injected more passion into each school visit than the AFL players themselves when spruiking the club’s ‘come and try day’.

And the following evening he led members of his under-9 side and Scott Moore’s under-11 squad at training with the same amount of gusto.

“Its been a great week with all the kids talking about the school visit and I personally thought Harry and Colin did a great job,” Trickey said.

These are wise words from Paul Chandler who will commence his 20th season at the club next month when he coaches the Roosters’ under-13 side.

“We’ve seen some of the best footballers with the best abilities attempt the game so having a good attitude is key,” he explained.

The four-time junior best-and-fairest winner was only ten years old when he first kicked a sherrin.

He now watches senior games from the sidelines while encouraging his junior brigade to keep an eye out on the current men’s side.

The seniors often jog past each Thursday evening and encourage the juniors to tag along to his delight.

“This is where I learnt to play and I’m here to give back to the kids now,” he explained.

“I came down here from Rugby League because they were short on juniors and from that point I’ve never looked back.” 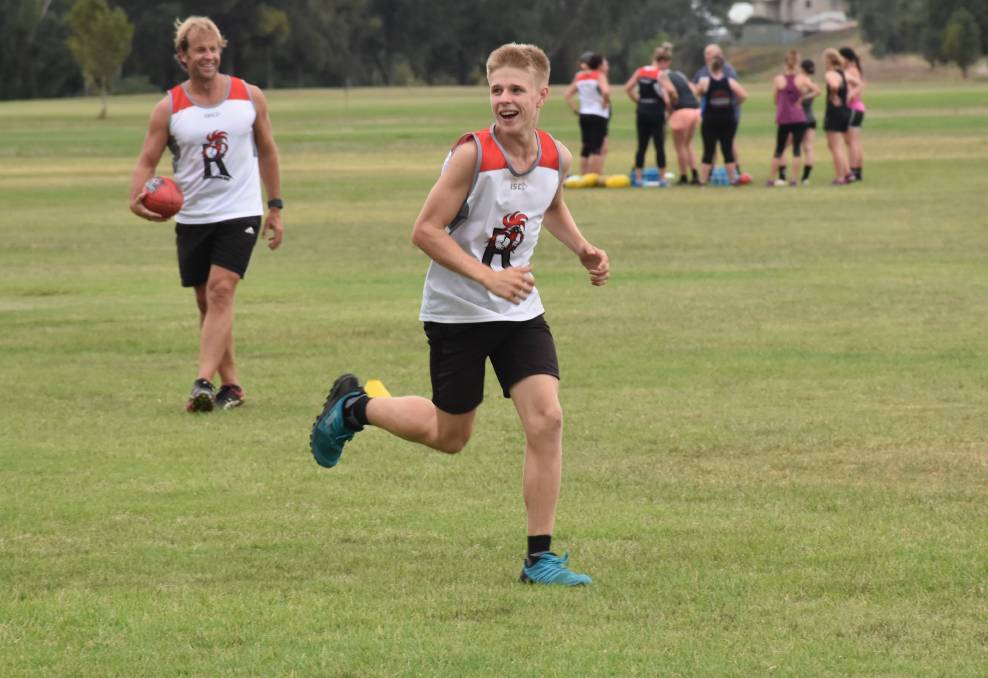 FATHER AND SON: Teenager Jesse Bates spots up his father Travis during the under-15 skills session. Both have trained with the senior side throughout this summer.

“Watching the kids development as both players and people from a really young age and to see where they’ve got to now is the most rewarding part.”

The dangerous forward has once again ruled himself out from an on field comeback, much to the amusement of his team manager Jake Mellon who claims the stalwart says ‘the same thing every year’.

Chandler concedes that a comeback may take place in the final round this year against Warners Bay.

That day the club will celebrate its ten year reunion for the reserves premiership side.

The 2009 flag was courtesy of a Josh Child point after the siren. 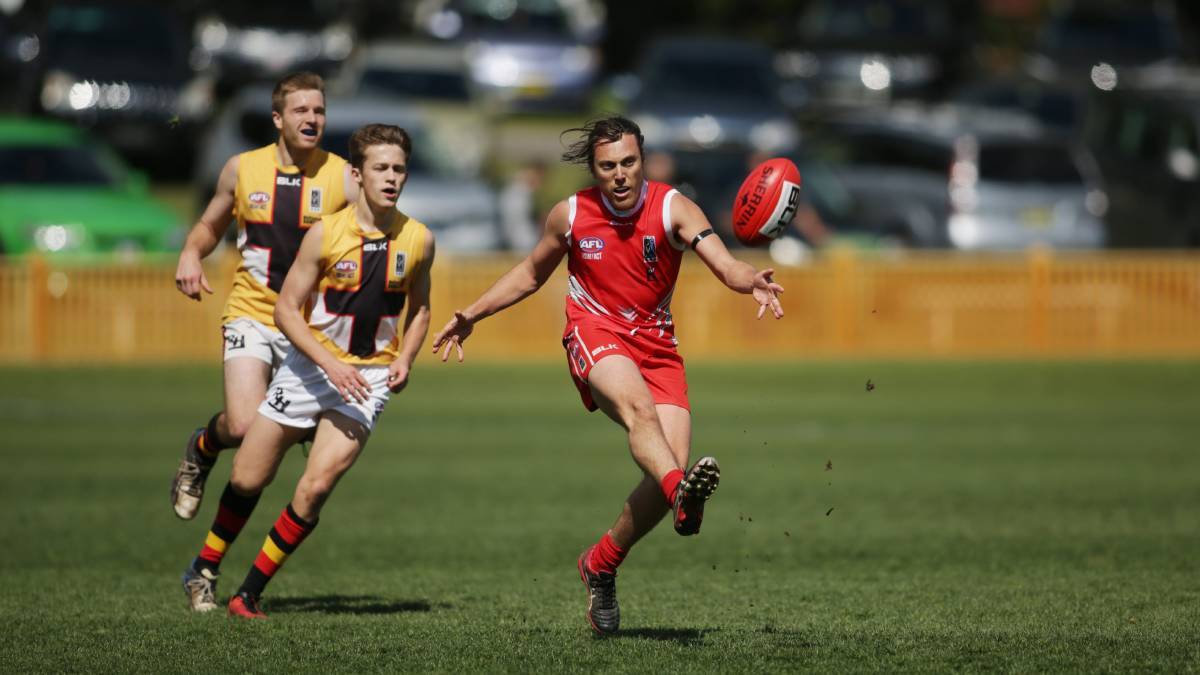 When Daine Cowburn was growing up on the fields of Singleton his one wish was to be a Sydney Roosters’ hero.

Though the NRL dream never came to fruition he would still become a heroic Rooster in his own right  on September 3, 2016.

“Leading into that 2016 grand final I remember that I woke up like any other footy day but I was really nervous at the same time,” Cowburn recalled.

“I had just lost my grandfather Kenneth Howard in the week leading up to the match so I was really playing for him to be honest.”

The Roosters would play off against Maitland before a vocal Newcastle crowd that day for the AFL Black Diamond Division One premiership flag.

“I remember my first punch was off the half back flank and I was happy that I executed it well because it was pretty windy that day.”

Such was Cowburn’s influence down back that the Roosters would limit the Saints to a low 1.2 (8) scoreline  for a majority of the decider before eventually settling for a memorable 6.7 (43) to 2.4 (16) victory. 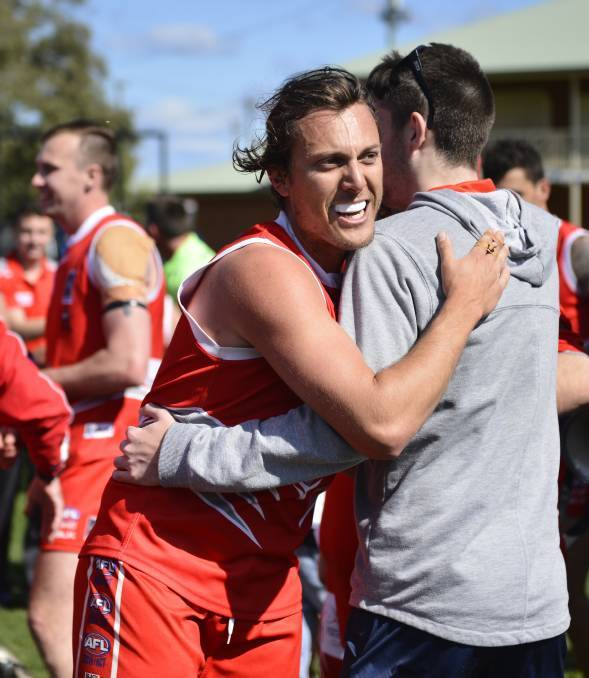 Cowburn, who joined Sam Brasington and Richard Wilkes as four time premiership players, would also be named in his side’s best players for only the third time that season.

“When the siren went I just had tears going down and my hands in the hair because it was a close game but we got the run in the end,” he recalled.

Three years later the soon to be 30-year-old now hopes to see the younger members of his club experience finals football.

“We have a good bunch of kids so I’m excited for the group and I just want to make finals and show that Aussie Rules is alive and well in the town,” he explained. 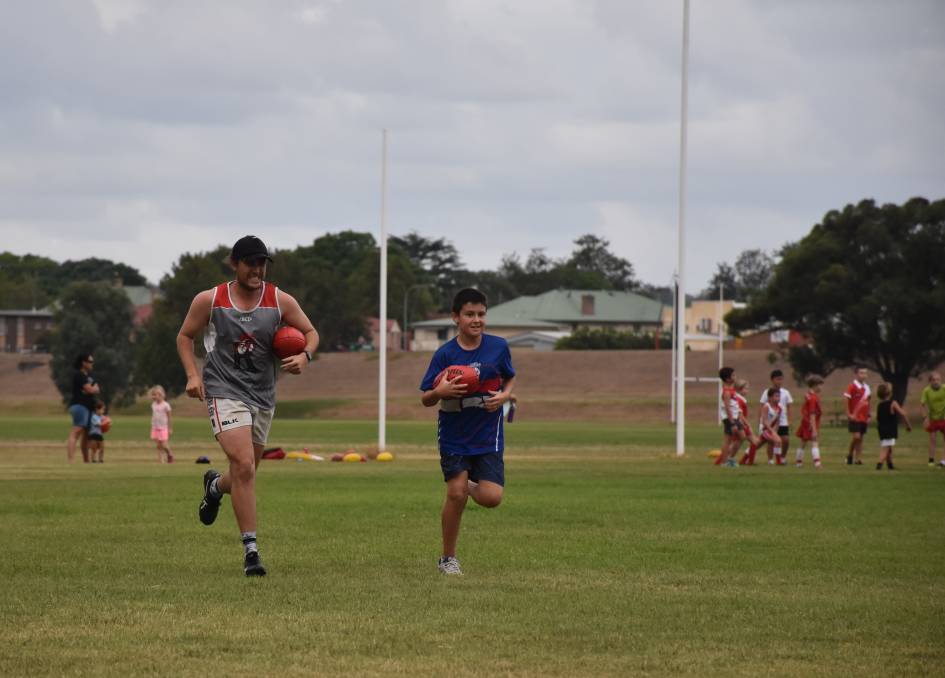 “All sporting clubs in Singleton are family clubs but the Roosters really do open their doors to make you feel welcome.”

“A former coach Stefan Nester summed it up well when he said ‘I came to this town not knowing anyone and this club automatically became a second family to me’.?” 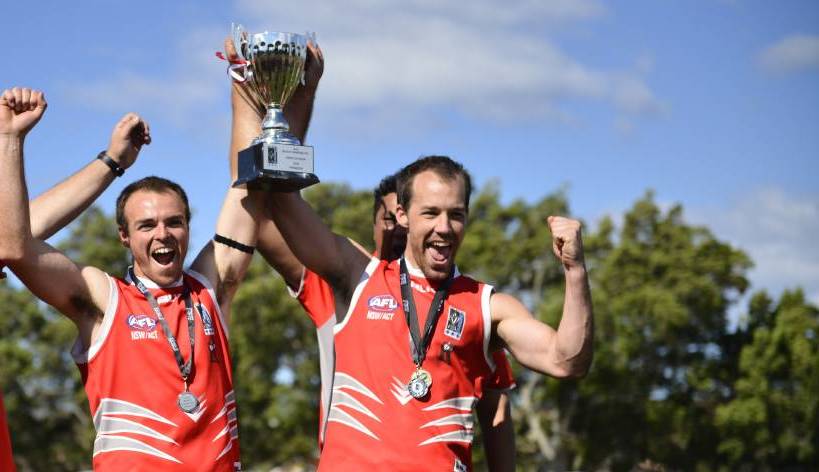 Playing coach Andrew Scott may just be the club’s most influential player of the modern era.

Yet even the former NEAFL and WAFL ball winner had to serve a short apprenticeship down back when making his debut against Newcastle City on April 9, 2016.

“I was named at half back and I wasn’t really happy about that to be honest,” he laughed.

“The coach probably knows who he is but I just had to keep at it, play my role and limit my direct opponent’s influence on the game.”

The rest would be history for the now 31-year-old who is coinciding the club’s family theme with the birth of his first child in the upcoming months. 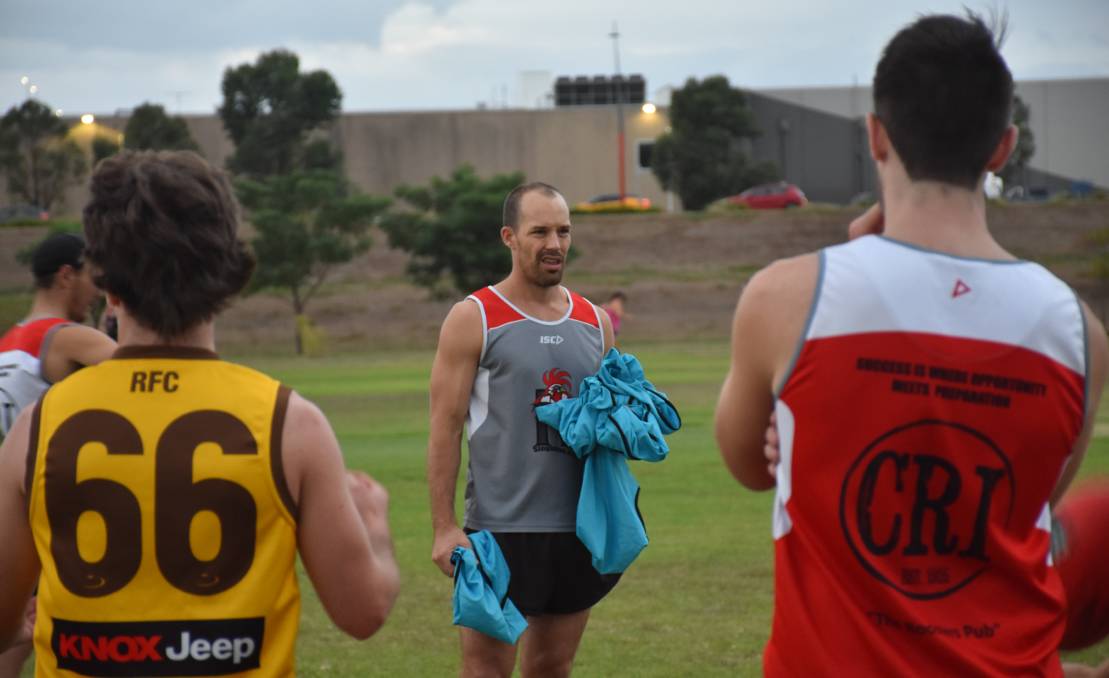 THE COACH: Andrew Scott addressing the players on Thursday night.

“I don’t have family in town so I consider the club a second family,” he added.

“This was the easiest way I found to get amongst the community and meet new people.”

“A lot of people have put the hard work in to put the club in the position that it is in right now and that’s pretty exciting.” 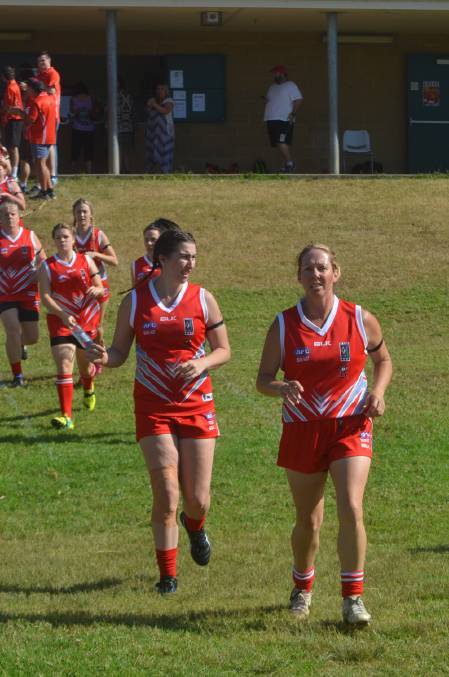 The ball is bounced back in the middle and teenager Kyah McBride gains possession.

She swings around, launches the ball into the forward 50m arc before her teammate (and mother) Nadene who, in turn, is pushed in the back, granted a free kick and then slots Singleton’s first goal in women’s footy.

Three years later and the (now) 48-year-old will again run out for the Roosters’ women’s team alongside her daughter.

“Daily, hourly and I think even ten-minutely, mum is always talking about the club; she’ll go to meetings all week and check the finances and the list just goes on,” Kyah admits.

Sadly, it took Nadene McBride three years to get involved with the Roosters after moving to Singleton in 2012. 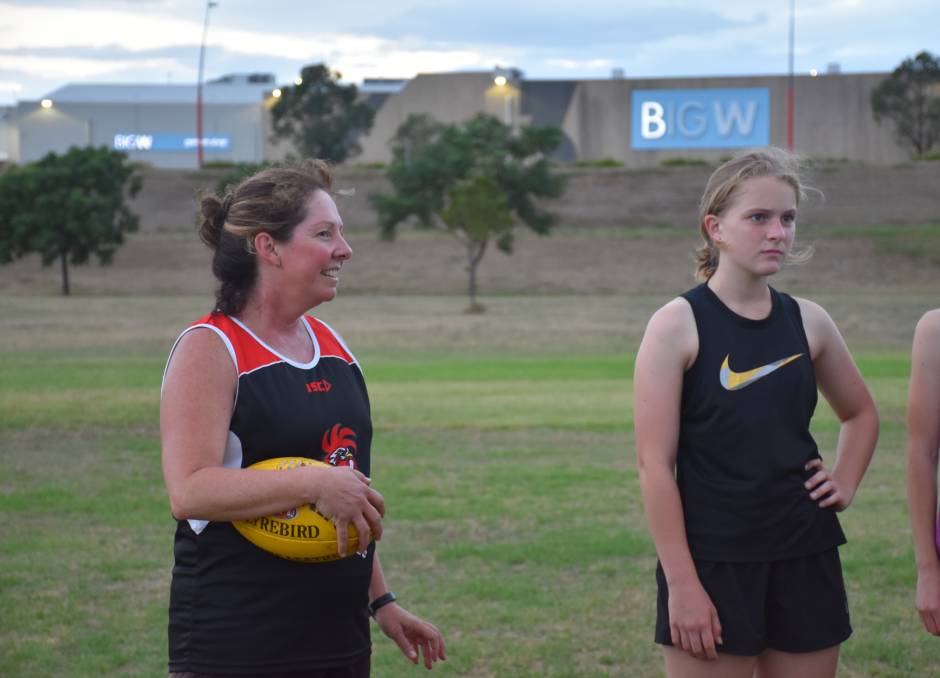 This was partly due to a secret pact she made with her husband Graham following her investment of time to her volleyball and squash club in their previous life.

Thankfully, the pact has now clearly been broken as she enters her third year as senior president.

“In all honesty, the best thing I’ve done is decided to stay at the club despite the fact I was going to walk out  over this last summer,” she explained.

“But we stayed and it has been a rewarding decision.” 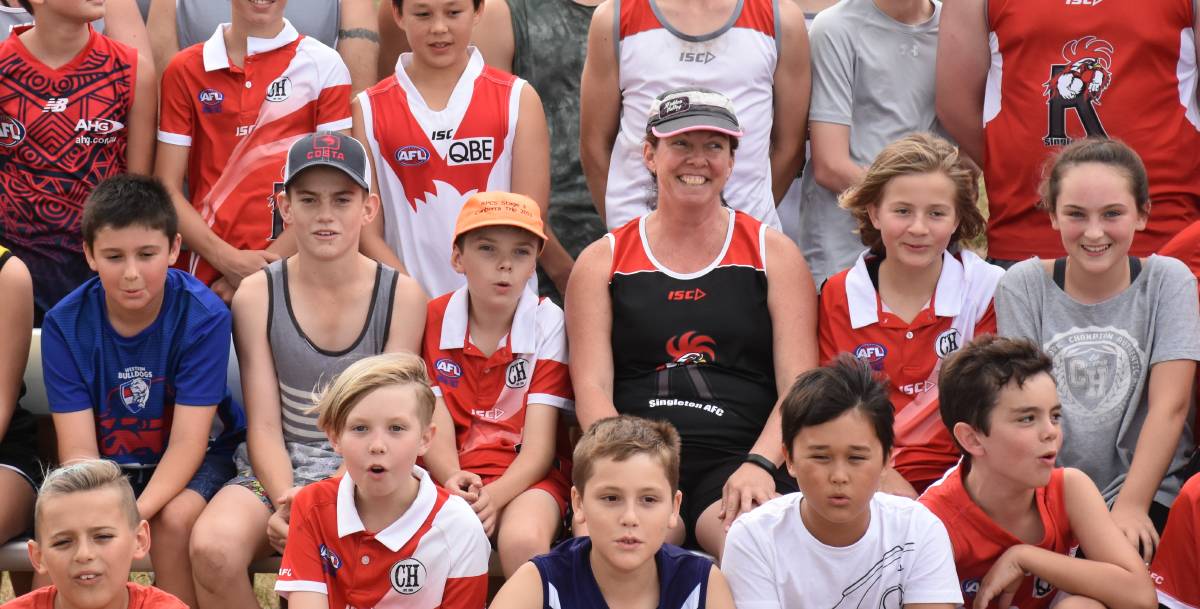 “All the people who are coaching this year are family people and that’s the theme we want to spread around the club this year.”

The club has recently welcomed back former president, coach and long time servant Mal Draper after nearly ten years away from the club.

She admits she’s thrilled to appoint him as the women’s coach where he can share a wealth of knowledge dating back to when he was on Melbourne’s AFL list in the 1980s under legendary coach Ron Barassi.

“To get him back was a massive feat, it’s a credit to the club but ultimately we also have to pay tribute to his family for getting him back,” she added.

“I met him at his daughter’s birthday and we both swore that we wouldn’t be talking football; well what a joke that was because for the next two hours we just couldn’t stop talking football.”

“How we get trained on the field is always going to be different to the guys and we range from top athletes to girls who have never played the game before.” 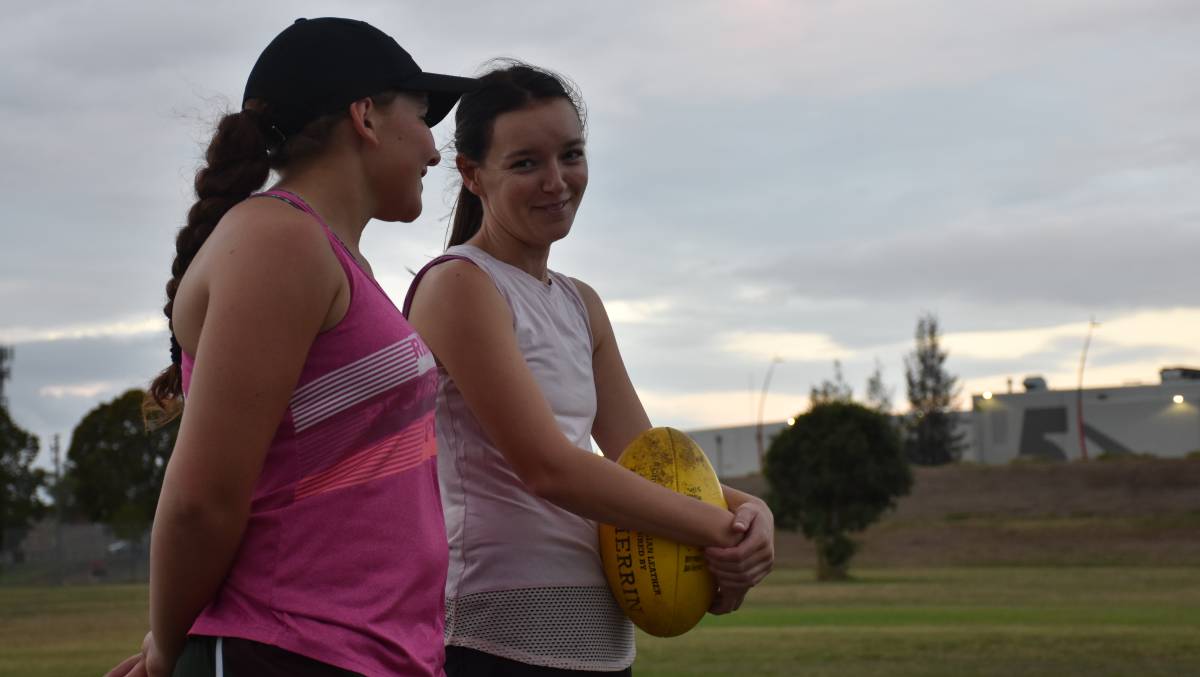 WOMEN IN FOOTY: Some members of the side are camera shy…. others are not.

“But that’s the nature of Singleton and its good because it gives everyone a chance to have a crack.”?