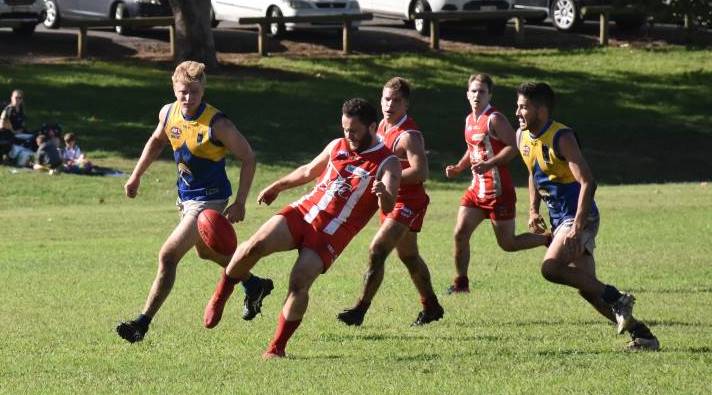 NEW RECRUIT: Alex Tigani gets his kick away.

The Singleton Roosters’ senior side successfully opened its 2019 AFL Hunter Central Coast campaign with a 17-point win over Nelson Bay on Saturday afternoon.

Returning Marlin Kieran Lamond found the opening goal while former Sydney and Essendon ball winner Craig Bird led the disposal count early as the visitors took out a 1.2 (8) to 0.2 (2) lead at the first break.

Key defender Sam Howard proved to be the Roosters’ best player post-match before the club’s eight senior debutants were pushed into the middle of the players’ circle for the team song.

MAN OF THE MATCH: Sam Howard and his fellow defenders kept Nelson Bay to one major after quarter time.

MAN OF THE MATCH: Sam Howard and his fellow defenders kept Nelson Bay to one major after quarter time.

MEANWHILE Terrigal Avoca made the biggest statement of the competition when dismantling Gosford 21.18 (144) to 3.3 (21).

Late goals to Riley Warner and Matthew Spinks would see Warners Bay hold off Wyong Lakes 10.9 (69) to 8.9 (57) while Cardiff and Newcastle City also made the winners list.