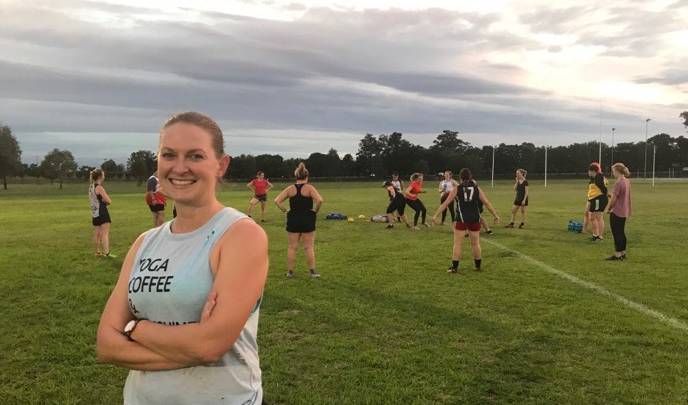 NEW LEADER: Former South Newcastle hockey star Liz Moule has been elevated as the co-captain of the Singleton Roosters for 2019.

Singleton Roosters’ co-captain and ball-winner Liz Moule hopes her side can make an impact early in its season opening clash against rival Muswellbrook this Saturday afternoon.

The Roosters were scheduled to open their season against Nelson Bay last week however they would have to claim a win by default due to the Marlins’ lack of available players.

“We were pretty disappointed that weren’t able to run out last week but we’ve got the opportunity to open our season this weekend and we’re going to give it all we got,” Moule explained.

“This is really just a chance for our girls to get out there and play as a team.

“Our determination and hunger for the ball will be the primary focus from the start.”

Singleton celebrated a 34-point win over Muswellbrook last month when the two clubs played off in a pre-season practice match.

The Cats will be expected to come out firing this weekend to rectify their dreadful 178-point defeat to Killarney Vale last weekend.

“Muswellbrook is a very hard hitting team so we’ll need to work together to protect the ball and we’ll use our skill and speed to get the upper hand,” Moule added.

While her fellow captain Tori Cowburn will be unavailable for a majority of the weekend’s clash Moule has cast the spotlight on some of her younger teammates.

“Sarah Mousley will be one to watch,” she continued.

“She hasn’t played that much, as far as we’re aware beforehand, but she has great hands and a great jump.

“Avril Blair-Dermody certainly surprised us in the practise game as well, she was very determined on the ball against Muswellbrook and she’s only 16.

“She has a bright future ahead of her.”

Moule, who turns 30 this month, will lead her girls out for her first game as captain this weekend just three years after the former South Newcastle hockey star jumped codes.

“AFL wasn’t really much of a consideration, coming from Queensland I’ll admit that hockey was my main team sport,” she said.

“Now I’m proud to be in this position and we’re keen to get out and give it a run this Saturday.”?

The women’s side will commence at noon this Saturday prior to the men’s side who take on ladder leader Terrigal Avoca at 2pm.

Earlier in the morning the men’s reserves side will also play off against Muswellbrook for the Nathan Duncan Shield.