After 12 weeks on the sidelines returning Singleton Rooster Samuel Brasington helped guide his side to an inspiring 86-point win over Wyong Lakes this afternoon.

The 28-year-old proved to be the star of the show with three goals while playing coach Andrew Scott continued to add to his Davey medal campaign with two in the 14.22 (107) to 2.9 (21) victory.

“It had been a long frustrating 12 weeks on the sidelines but it was nice to be back,” Brasington told the Singleton Argus post-match.

“I suffered a Grade 2 MCL tear halfway through the third quarter against Terrigal (Avoca) in Round 2 and that was my first game for the year.

“The recovery is usually eight to ten weeks but mine blew out to 12 weeks; filled with physio appointments, lots of rehab and a couple of weeks off work.”

While the Roosters have prevailed over Maitland and Gosford during his recovery the prominent forward had left a major void to fill in the first half of the season.

“The Wyong game was painful to watch from the sidelines in Round 3 because we were right in it until the end so it was good to make a return against them this week,” he added.

Brasington had registered his three goals by the final break by which time Rooster fans, starved of a large victory in recent weeks, started celebrating from the pavilion.

CELEBRATION TIME: Aaron Grant had never kicked a senior goal before this afternoon’s 86-point win. Here he is pictured booting his second in the final term.

The agile ruckman had never scored a single major until this afternoon.

Dylan Hixon, who had spray painted his hair pink to promote the club’s Breast Cancer Awareness Round, then kicked truly with minutes remaining to hand the side an 80-point margin.

After a handful of missed opportunities in the final term the veteran small forward, who had earned his senior spot on account of his loyalty to the playing group, then put the icing on the cake with his first senior goal.

“I started playing at the club in 2017 and I’ve managed to play nine senior games in that time,” Capell explained.

“But that was my first senior goal.”

MEANWHILE another two goal haul from ball winner Tori Cowburn would not be enough for the Roosterettes who went down to Wallsend West Newcastle 7.3 (45) to 5.5 (35).

This brings her tally to nine goals from seven games in season 2019. 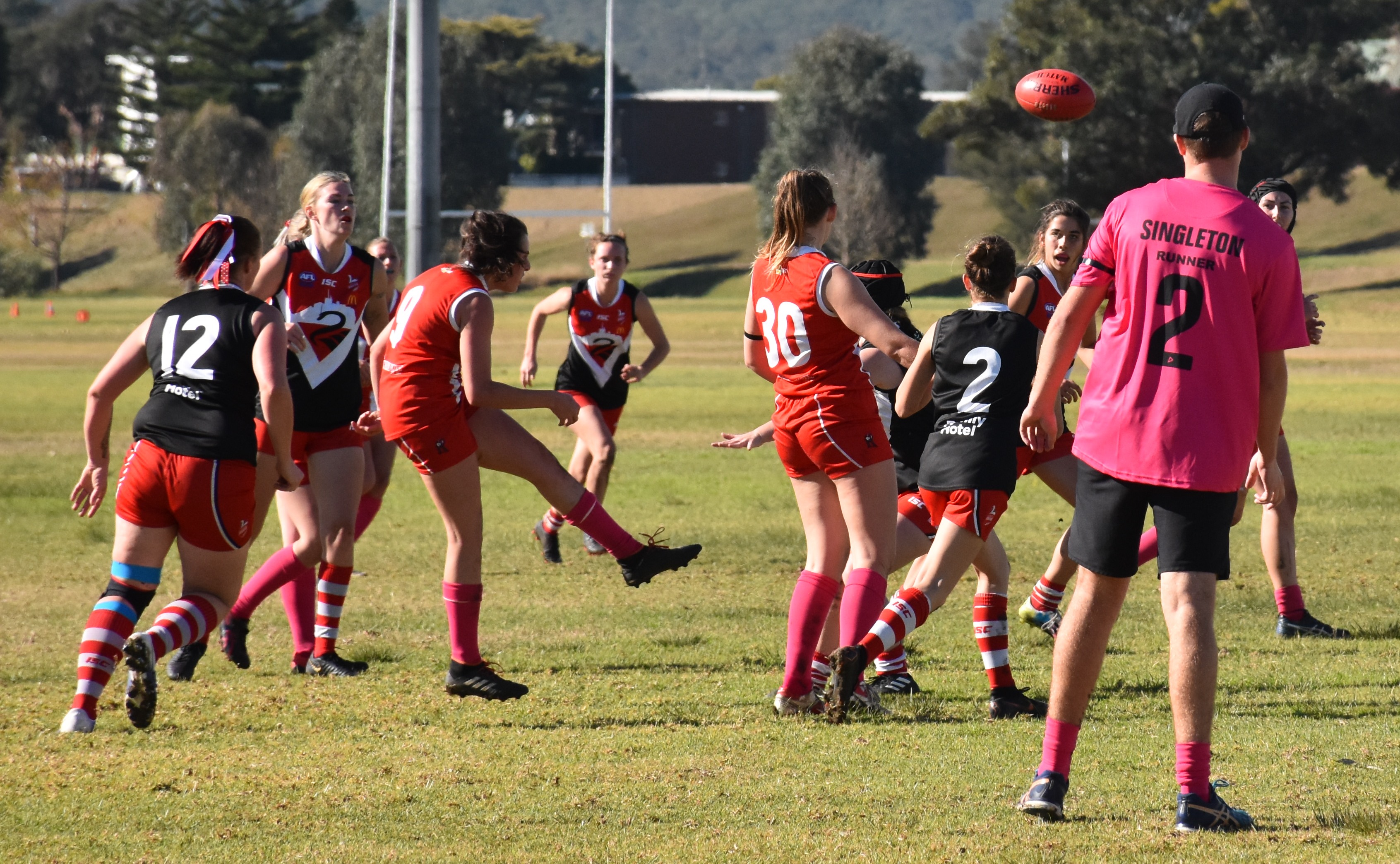 FEEL THE BURN: Tori Cowburn pictured in the second term.