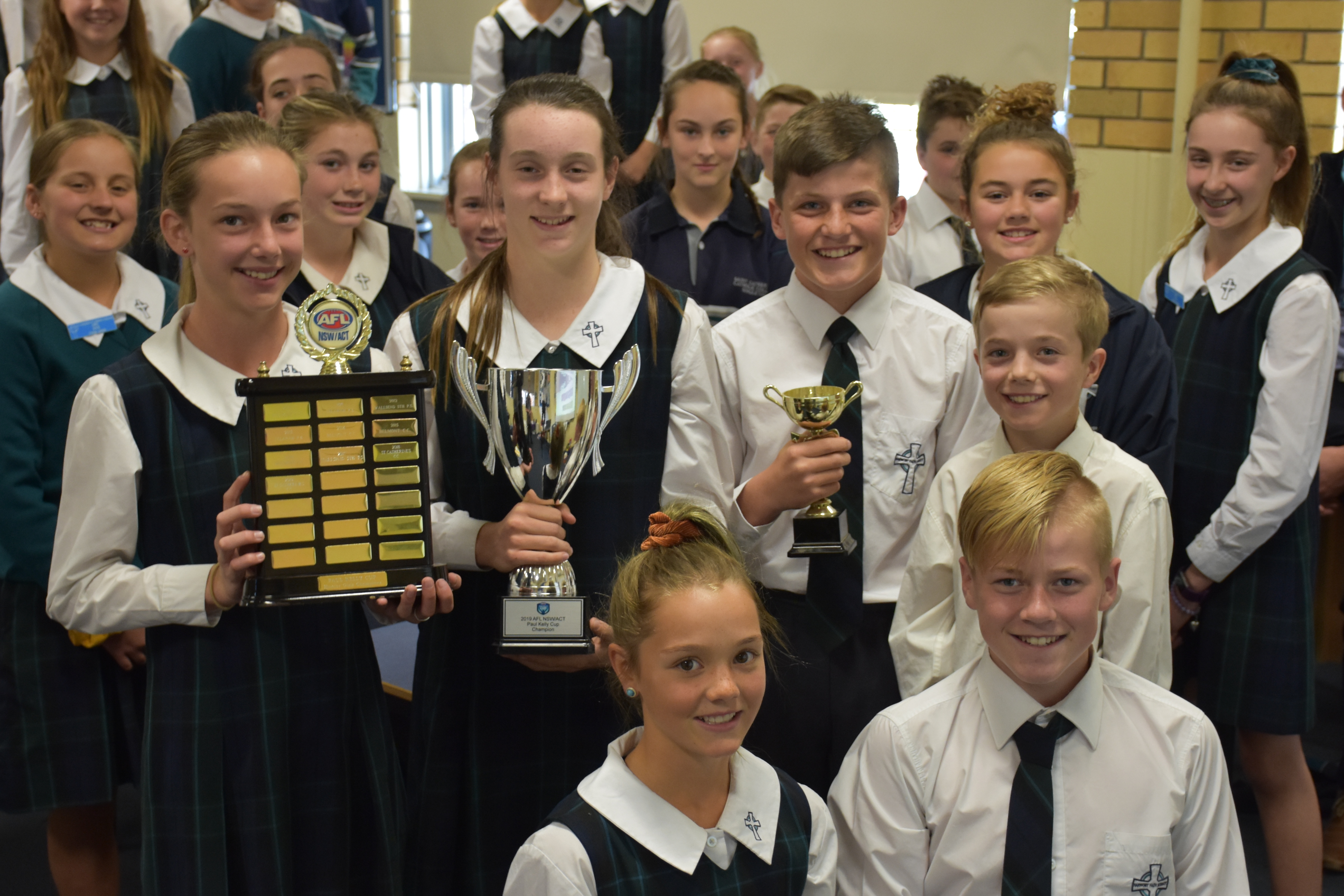 BACK FROM SYDNEY: The Singleton Argus caught up with Molly Thomas, Ella McLeod, Pat Nagle, Darcy Cruckshankas, Alex Neyland and Nate Rothall after the St Catherine’s Catholic College students represented their school against the state’s best.

Less than a fortnight after catching up with the victorious Singleton High School under-13 rugby league side it was time to cast the spotlight on the junior talents from St Catherine’s Catholic College to celebrate a historic week.

The primary school’s AFL girls side prevailed as NSW champions of the Paul Kelly Cup when taking on the state’s best at Sydney’s Spotless Stadium.

“We were really proud of the girls because they came so close last year as well but on this occassion they won all nine games,” Mr Patrick Fitzgerald told the Singleton Argus this afternoon.

“I also want to pay tribute to everyone at AFL NSW for their hospitality throughout the day at Spotless.”

“You feel for the boys cause they only lost 14-12 to Lismore who were the eventual champions as well,” he added.

The Singleton Argus caught up with six of the students this afternoon to celebrate the week that was:

1. Firstly, what position did you play on Monday?

Darcy Cruckshankas (age 10): Rugby – Half back.

2. What was your highlight of the day?

MT: When we all tackled Mr Fitz when we won.

AN: At the end when the buzzer went off and we all celebrated.

3. What other sports have helped you build on your skills?

4. Which student showed the most improvement?

5. Best advice you’ve been given as a student?

MT: The best advice I was given was when Mr Fitz always told me come up when I was back at the goals.

EM: Take your time when kicking for goal.

PN: To run straight and hard.

DC: Tackle around the legs.

AN: Don’t put your head down always try your hardest and work as a team.

6. Best advice you’d like to give to the school’s future students?

MT: I would like to give the future students lots of advice like to go out there and do your best and give it 100% to what they do on the field and to never be dirty to the refs or you’ll get sent off.

EM: Go out there and do your best. Also, try your hardest and be humble.

DC: When playing rugby, tackle around the legs.

AN: Set a goal and achieve it.