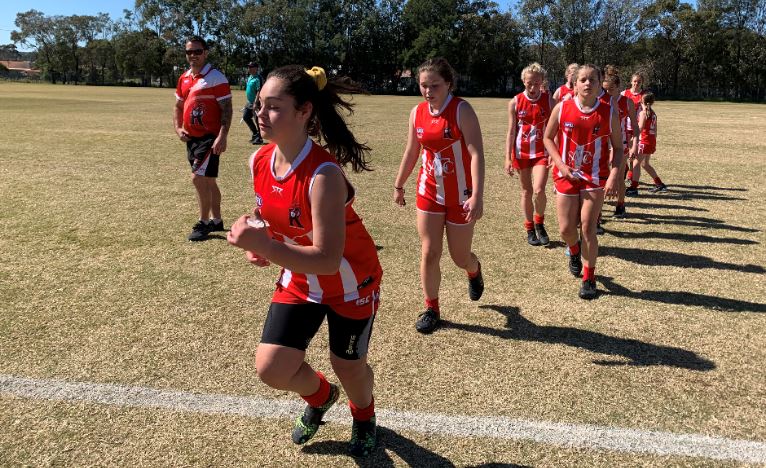 LEADER: Jessica Borg leads her Youth Girls side off the ground in her 50th game. The Hunter representative player won the coin toss for Singleton before starring in both the backline and the forward line.

The Singleton Roosters’ junior line-ups will enter this Sunday’s clashes as favourites at all levels such has been their red hot form in the past fortnight.

The Singleton Roosters’ under-11 side remain undefeated in the region’s U11 Giants league thanks to hard fought win on Sunday. 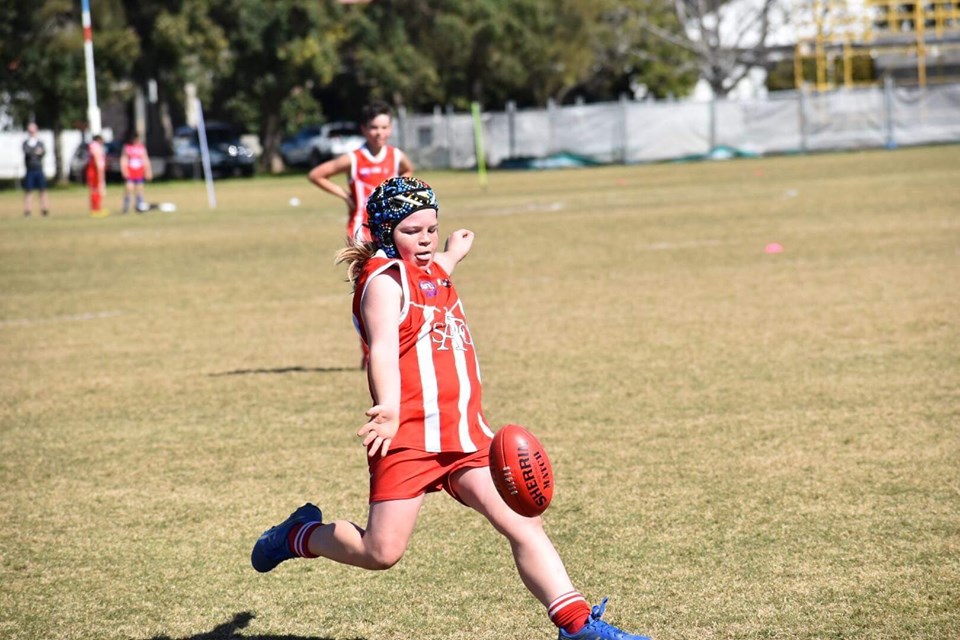 LINING UP: Nate Vesper lines up for another goal.

Singleton will now play host to Port Stephens at 10am this Sunday in the top of the table clash (neither side has faced a defeat yet).

The Singleton Roosters’ Youth Girls also remain undefeated thanks to their 9.10 (64) to 2.0 (12) win over Warners Bay on the adjacent field.

Jessica Borg led the team out in her 50th club game while fellow 50-gamer Lilly-Jane Williams was pivotal from start to finish.

Tyla Matthews also starred on debut with a goal in the second term. 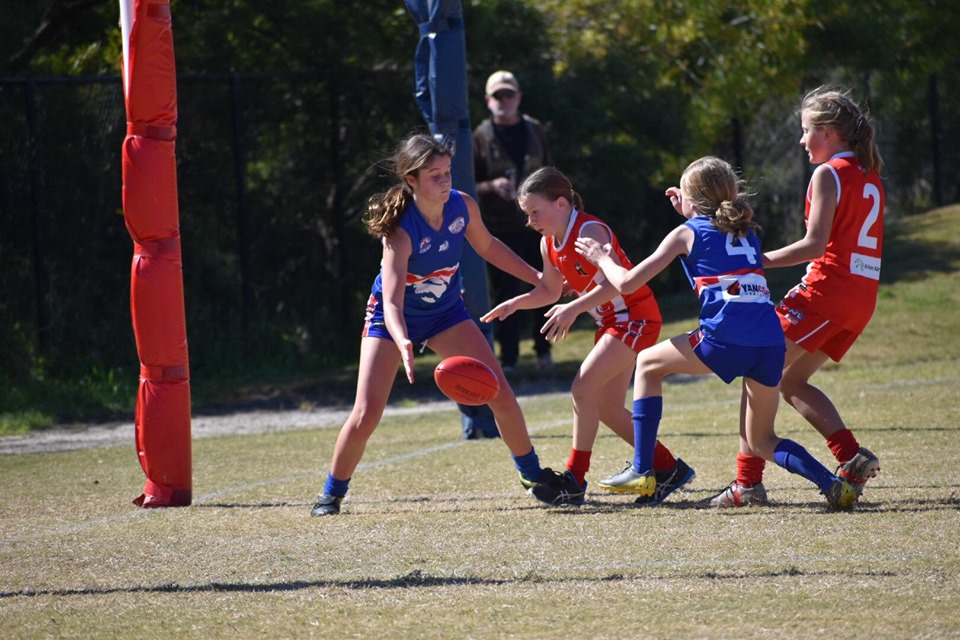 SEAGULL ON A CHIP: Small forward Georgia Dunn continued to sneak around the goal-square and came awfully close to scoring another goal on Sunday.

“Warners Bay had the depth and some talented players on their list but thankfully momentum swung in our favour after a quarter time rev up,” coach Alex Tigani explained.

“A special shoutout to Milly Stephenson who also kicked her first goal for the club and to Lily Bos who played half the game in the ruck.” 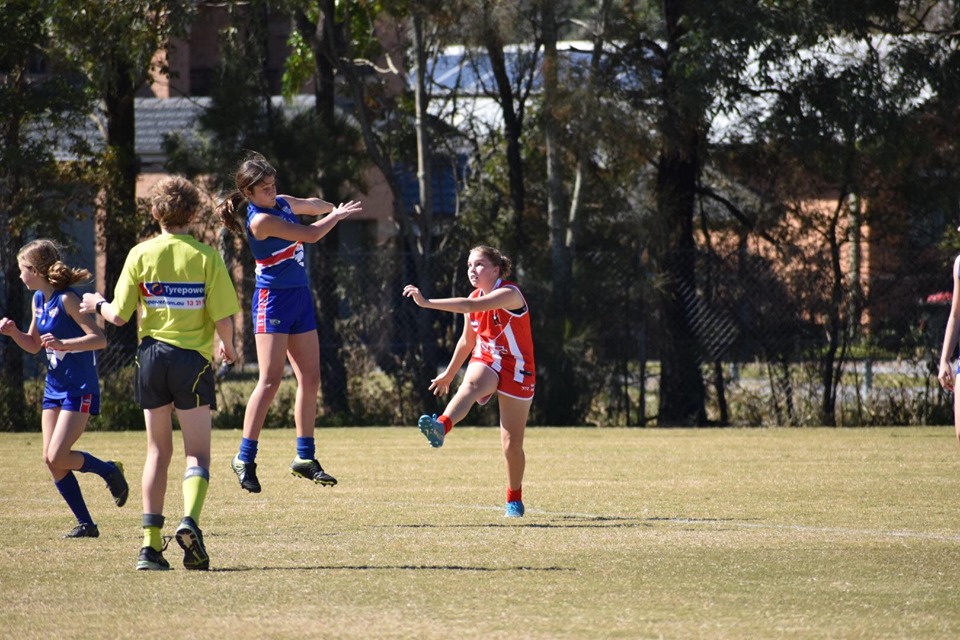 MILESTONE: Milly Stephenson scored her first goal for the club against Warners Bay.

Singleton will now play host to bottom-of-the-table side Nelson Bay at 11am this Sunday.

The Singleton Roosters under-13 side made the biggest statement in the competition on Sunday afternoon when holding a narrow lead in the dying stages of their clash.

Trailing the undefeated Newcastle City at No 1 Sportsground, the travelling parents and officials were left screaming in excitement when the Roosters looked set to hand the home side their first defeat for season 2020. 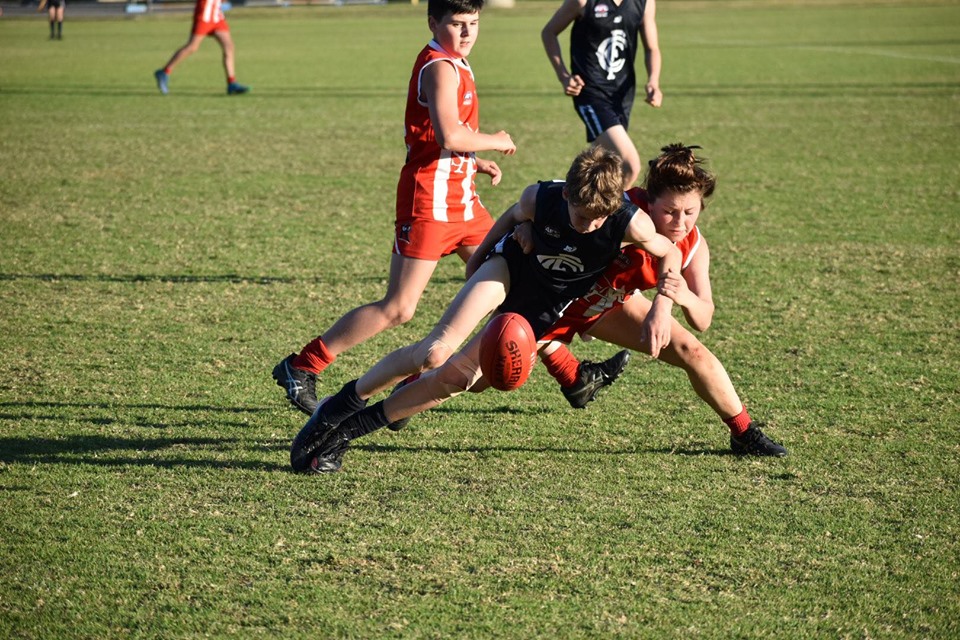 Singleton (fifth) will now play host to Warners Bay Red (sixth) in the bottom of the table clash this Sunday at 12.20pm.

The Warriors will aim for a 6-0 start to the season when travelling to Cardiff this Sunday for what looms to be a thrilling second vs. third clash.

The action will then continue at 3.20pm at Max McMahon Oval when Maitland (fourth), featuring Singleton players, plays host to the undefeated Newcastle City.

The Saints celebrated victories over The Entrance Bateau Bay, Northern Sharks and Warners Bay however were unable to match Cardiff on Sunday (facing a 90-point defeat).